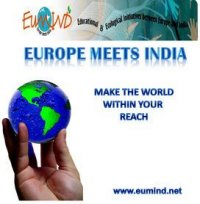 European schools:  EUMIND – INVITATION TO JOIN
http://www.eumind.net/ – INVITATION
EUMIND, Europe Meets India, invites new schools from Europe to join the action, as the network  in India grows to New Delhi area.
The independent EUMIND network, established in New Delhi area, offers new chances for European schools to cooperate with schools in India.
If your school is interested to join EUMIND, email to mail@euneos.fi .
We will respond by informing you about EUMIND schools in India, about their profiles, activities and resources. It is worth asking. Please also tell us shortly about your school!
EUMIND is a platform for networking schools in India and Europe and for promote interaction and intercultural understanding between their teachers and students.
English is the mutual language of communication of the EUMIND activities, of virtual eJournal projects and of student and teacher exchanges.
Schools with CLIL (Content Learning in Languages) are especially keen on transcontinental project work between Europe and India, because English is favored in school syllabuses on both sides. Also other schools, not only CLIL schools, are members. In addition, time zones of Europe and India easily allow live videoconferencing contacts during the office hours.
EUMIND was established as early as in 2008, after two preliminary years of contacts since 2006. EUMIND schools run internet-based eJournal projects and organise study visits of teachers / headmasters and exchanges of students. There will also be opportunities for internships.
The web tool eJournal is used in the EUM IND action. eJournals were developed within the framework of the COMP@CT network 2001-2004 and developed further since then. They offer e.g. an easy publishing online tool and include a built-in videoconferencing room, embedding and a video server. Students conduct research with the help of project scenarios on general themes such as Go Green, Values, Regions, Arts and Human Rights.
One thousand Indian and European students , mainly from schools in the Mumbai area in India and from Dutch schools in Europe,.participated in Journal projects in the school-year 2011 – 2012.
Read about EUMIND in http://www.eumind.net .
Please ASK MORE!
Photos from Eumind schools in India available at:
http://www.facebook.com/ejournal.fi
Pentti Pirhonen
Comp@ct Comenius Network
EUmInd
http://www.facebook.com/ejournal.fi
http://www.bornischool.org
Borni school support program:
http://www.ejournal.fi/info/index.php?action[]=IArticleShow::showArticle%28%
2754225%27%29

Student voice during the COVID-19 pandemic

The present questionnaire is addressed to teachers in primary and secondary education (students aged 3 to 21). It aims to collect information on the educational technologies you used in the weeks that...
View on Facebook
·Share